And the AGTA Winner Is… 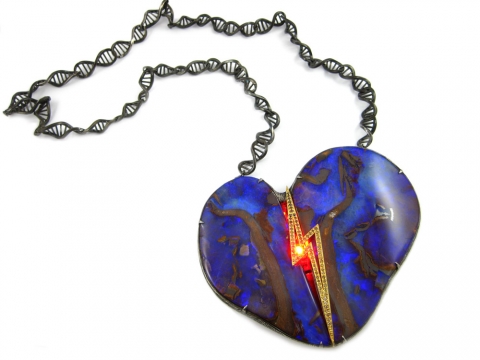 K. Brunini Jewels is looking forward to next week’s AGTA Spectrum Awards ceremony, where they will accept the prestigious “Editor’s Choice” award. See the original press release below:

New York, NY – October 23, 2013
Once again, the American Gem Trade Association played host to a select group of top consumer and trade publications as well as influential bloggers at a sun-drenched loft in New York City. After a weekend of our panel of experts judging all 450 + entries, which included jewelry by both emerging and established artists, and loose gemstones and cultured pearls, attending media had the opportunity to review all entrants and winners of this year’s AGTA Spectrum Awards™ competition. Editors from publications such as New York Times, O The Oprah Magazine, InStyle, Town and Country and Brides took the time to look at all pieces on display before voting on the “Editor’s Choice Award.” The amazing Katey Brunini took home that award with her “Robot Heart” necklace… Read more