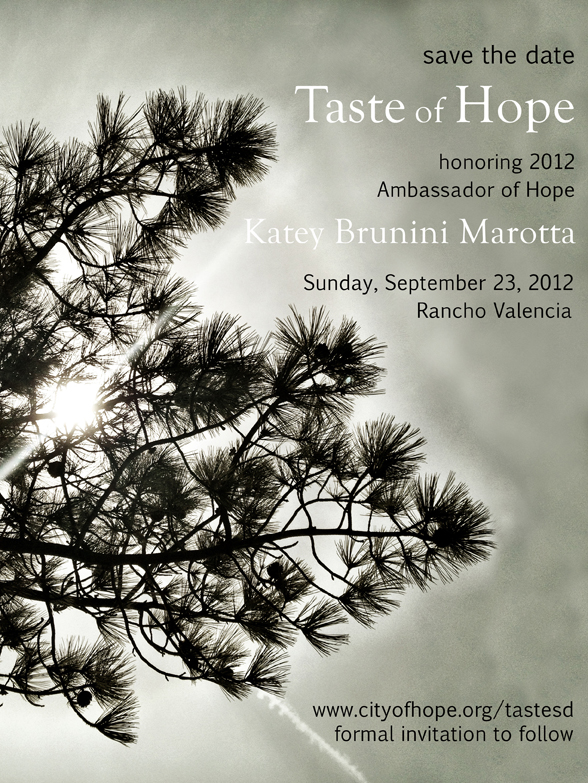 TO BE NAMED 2012 AMBASSADOR OF HOPE

SAN DIEGO, CA  June 28, 2012  The City of Hope’s Tenth Annual Taste of Hope Benefit will honor award-winning jewelry designer, Katey Brunini Marotta at the newly remodeled Rancho Valencia Resort in Del Mar on Sunday, September 23, 2012. Hosted by the Women’s Council of San Diego, Taste of Hope supports City of Hope, one of the nation’s leading research, treatment and education centers for cancer and other life-threatening diseases. This culinary and wine tasting fete will showcase more than 35 top restaurants and wineries, unique raffle items, musical entertainment and the popular wine “mystery” bags for attendees.

San Diego-based jewelry designer, Katey Brunini Marotta, will be presented with the Ambassador of Hope Award for her compassion and commitment to people battling life threatening diseases. This award is given to a leader of the San Diego community who has been an inspiration and example to others in the fight against cancer, diabetes and HIV/AIDS.  Named 2011 Fine Jewelry Designer of the Year by the Women’s Jewelry Association (WJA), Katey is a local and celebrated jewelry designer.  She creates fine jewelry that embodies the power and grace of nature.

Rancho Valencia’s acclaimed, Executive Chef, Eric Bauer and Wine Director, Stacy Jacobs will be featured purveyors at this special evening.  Beginning January 2012, Rancho Valencia embarked on a six month, $25 million property renovation.  Taste of Hope will be the first charity event held at the exquisite Rancho Valencia since it closed its doors in January.

City of Hope is a leading research and treatment center for cancer, diabetes and other life-threatening diseases. Designated as a Comprehensive Cancer Center, the highest honor bestowed by the National Cancer Institute, and a founding member of the National Comprehensive Cancer Network, City of Hope’s research and treatment protocols advance care throughout the nation. City of Hope is located in Duarte, Calif., just northeast of Los Angeles, and is ranked as one of “America’s Best Hospitals” in cancer and urology by U.S. News & World Report. Founded in 1913, City of Hope is a pioneer in the fields of bone marrow transplantation and genetics.