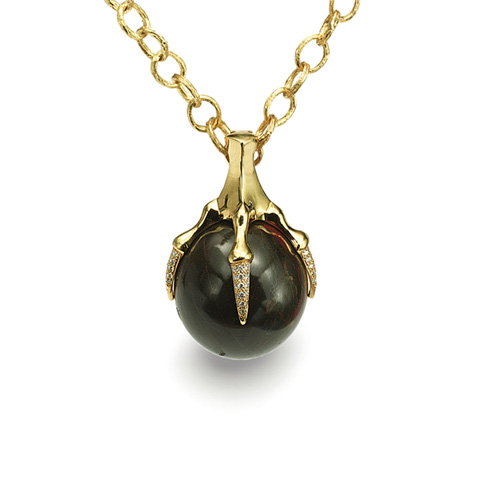 (New York, NY) June 2007 San Diego based jewelry designer Katey Brunini, of K.Brunini Jewels, is traveling to Italy this summer where she will receive international recognition as part of the Spoleto Festival “The Festivale due Mondi”. Brunini, who was recently awarded the JQ Retailers’ Choice Designer (in the gold jewelry category), was invited to visit the festival last year, and once the committee saw her unique jewelry designs, she was voted in as one of the presenting artists at this year’s festival, June 30-July 15th, 2007.

A native and 11-year resident of Solana Beach, Katey Brunini’s jewelry collection has become one of the most recognizable nature-inspired fine jewelry lines in the industry, receiving recognition not only from her devoted customers, but the retailer community as well. Brunini recently won Retailer’s Choice for favorite jewelry designer of 2007 for her exceptional work in gold. The design awards were created by JQ International Magazine to honor the creativity and innovation of the world’s finest jewelry designers. Brunini’s fan base stretches across the US coasts from San Diego to New York, and even though she’s lived in Italy as a jewelry apprentice, this is her first time being recognized internationally for her designs.

The Festivale due Mondi is held annually in the city of Spoleto, Italy, just 90 minutes outside of Rome or Florence. It is a 15-day celebration showcasing the best in Italian culture, music, theatre, opera, art and entertainment. Katey Brunini will talk about her latest collection, Objects Organique, debuting in Spoleto. The collection is based on organic inspiration found in nature much like the inspiration of St. Francis of Assisi who spent years living in the caves above Spoleto.

K.Brunini’s Objects Organique collection incorporates 18K gold, sterling silver, colored diamonds, wood replacement opal, aquamarine crystal, exquisite bi-color tourmaline, and rare melo pearls. This bold collection capitalizes on the organic roots of K. Brunini Jewels while adding a new element of power. Objects Organique is feminine, fiery, and invites wearers to connect with the elements and delight the senses in the natural beauty of jewelry. The Spoleto Festival, which began in 1958,  is a celebration of the best artistic impression in design, dance, prose and lyrics. For the last 50 years, Maestro Menotti personally chose the artists (among the most talented professionals in their fields) and made of The Festivale due Mondi a worldwide attraction that gives international fame to this small Umbrian city.

In 1956, when Francis Menotti, a renown artistic director and composer, was looking for the perfect city to welcome a music festival, he chose Spoleto due to all of the stenographic spaces: the XVIIth century theater Caio Melisso (at that time dedicated to cinema and which perfect acoustics was restored thanks to Menotti’s generosity), the big XIX century new theater, the open air Roman theater and the Cathedral Square, where the final concerts of the The Festivale due Mondi have always been organized. After the first festival in 1958, Spoleto is applauded as the new Italian Salzburg, and during the following years The Festivale due Mondi welcomes famous people such as: Wally Toscanini, Indro Montanelli, Pablo Neruda, Pier Paolo Pasolini, Salvatore Quasimodo, Ezra Pound, Eugenj Evtuschenko, Luca Ronconi, Al Pacino and Mariangela Melato.

Katey Brunini is known for her Shapes of Strength collection that unveiled five unique lines in five years: Twig, Vertebrae, Spider Web, DNA and Skipping Stones. Brunini continues to keep the meaning and sentimentality of designer jewelry alive in her 2007 debut of this new extension of her brand in the Objects Organique collection.