JCKonline Exclusive: A Wardrobe For Warriors 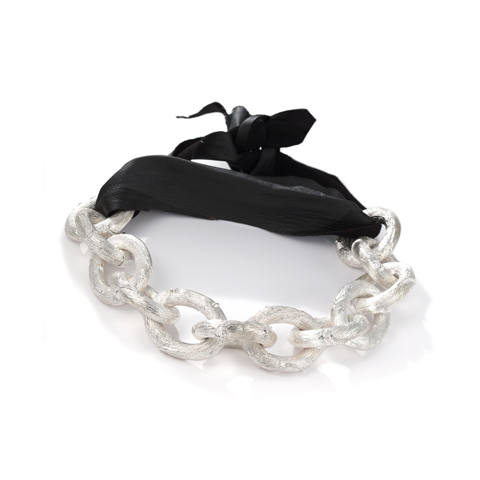 When Katey Brunini launched a 23-piece collection of survival-gear-inspired body armor (yes, think Xena) at Roseark in West Hollywood last December, the affair was like a kooky belated Halloween party complete with costumed guests, a steel drum band, and a modern-day female shaman who blessed the line. Brunini knew the collection was eye-catching—”All of my pieces are meant to be conversational,” she told JCK in a phone interview—and that the concept was as unconventional as one can be (sterling falconer’s gauntlet, anyone?), but little did she know just how much demand could exist for people looking to channel their inner warriors.

So that night, after selling out of earrings (ranging in price from $1,200–2,400), and selling a $13,500 18k gold neck with a carved moose-antler motif, Brunini expanded the line for Jewelry Week in Las Vegas, upping the number of SKUs to 62 total.

No stranger to bold design, Brunini’s Body Armor collection marks the final chapter in her Shapes of Strength series, which also includes Vertebrae and Spirit Animals. The goal of Body Armor is to strengthen and inspire women with virile images like horns that are found in nature. Some non-natural symbols—sundials, shin guards, gauntlets, and a breastplate (in the works)—offer a more literal interpretation of her theme. The story line behind the designs is inspired by a fictional tale from Brunini’s vivid imagination: a sailoress from New Zealand and her travels, including encounters with Maori symbols like the fish hook. Ebony wood, buffalo horn, fire-blasted sterling silver (to give items a red, purplish-blue hue), 18k gold, and sprinklings of sapphires help tell the warrior tale and offer a range of price points—from $350 for a pendant to a $13,125 shin guard.

The pieces represent “hope and opportunity that are born from life’s catastrophes, and physical reminders to stand up for what we believe in,” Brunini told the press.

So far, a number of smaller cuffs have sold, but no takers yet on shin guards, save for Brunini herself who wears them to parties in LA. The response evoked? “People want to know more,” says a Brunini spokesperson.